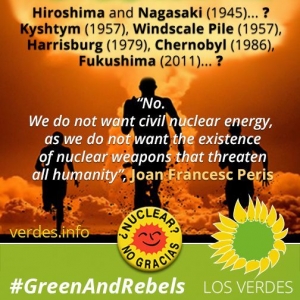 The recent incident in the Belgian Tihange nuclear plant, a fire that caused a shutdown of the reactors, reminds us of the fragility and vulnerability of these facilities that hide much danger in the event of serious accidents such as those wich have already occurred throughout its history: Kyshtym (1957), Windscale Pile (1957), Harrisburg (1979), Chernobyl (1986), Fukushima (2011), the latter not yet fully completed.

Since the attack on the United States to Japan with two atomic bombs dropped on Hiroshima and Nagasaki that killed nearly two hundred thousand people immediately and many more due to the radioactivity and its brutal consequences on living organisms, along with the arms race of the Cold War with the constant threat of nuclear war between the two powers which divided world hegemony between them after World War II, the USSR and the United States, the aforementioned civil nuclear industry starts the generation of electricity. Because we must not forget the inextricable link of this complex global with military power, nor that their actual costs per kWh are more expensive than all the other ways to generate electricity.

The nuclear power companies that mount them always count on the cooperation of States, with huge support in all places, and referral to the budgets of the countries or directly charging users many costs such as power management nuclear waste, one of the most serious problems of this energy for the lengthy duration of the radioactivity remains of fuel in some of its components of thousands of years, evacuation systems, security programs and protection population or repairs of damages in case of accident. We are facing an industry protected by states and which all citizens pay and which is bound to the appeal to total war being a weapon to maintain the world hegemony in the hands of the powers that have atomic weapons.

Now, when scientific studies have shown the world the evidence of climate change, defenders of this dangerous power pretend to find an excuse to relaunch it again, after declining by the social disrepute achieved by nuclear accidents which had led to a series of moratoria in many countries, stating that nuclear power plants do not pollute the atmosphere. But this is not true if we consider not only the process of power generation throughout its life, but the totality of the tasks necessary to operate such as obtaining the necessary fuel for operation uranium with an expensive and polluting process of extraction and crushing rocks to extract the ore, the process of building power, its dismantling, processing, transportation and storage of nuclear waste… Those are many CO2 emissions that those who consider it as a clean energy want to forget and, of course, if somehow cleaner than thermic power, it is a lot more polluting than any renewable energy and much more dangerous.

But also, this nuclear power, so dangerous and deadly for many people in the event of accident, as has been shown, is not necessary for the production of electricity supply for the citizens. Increasingly more advance technologies of renewable energy and resolute and firm policies to promote energy saving and eco-efficiency in production can ensure the functioning of the productive structures of the countries while abandoning both nuclear energy and polluting industries which cause climate change. Solar energy, biomass, wind and tidal energy increasingly contribute and can provide many more kWh in electricity distribution networks. It is not true that developed countries need to employ nuclear energy to maintain the quality of life of their populations. In some of them, as is the case of Spain, there is an oversupply of electricity that leads even to the stoppage of other electricity production plants, such as natural gas plants,while nuclear plants are all working at full speed.

In addition, nuclear energy has a structural problem that is not resolved, what to do with nuclear waste. We can not forget that many tons, thousands of nuclear fuel waste with high radioactivity have been released into the oceans or brought to African countries such as Somalia, because of the high cost of treatment and safe deposit, taking into account the length of its radioactivity. This highly carcinogenic waste in the Spanish case, which supposes more than 12,000 m3 of volume throughout the life of its nuclear power plants are one of the best reasons for leaving this unnecessary and dangerous industry urgently. No system to make them inert has been found. In the best case, the solution adopted is the construction of a waste tank that has a very high economic cost which has to pay society again and, in fact, causes a high concentration of radioactivity at a point of the land for thousands of years.

No. We do not want civil nuclear energy, as we do not want the existence of nuclear weapons that threaten all humanity. The world can work very well without these so dangerous resources that have killed a lot of people with its radioactivity, it would be much more friendly and peaceful, also much fairer, if the powers were devoted to resolving conflicts by means of consensus and solidarity and forgot the wild resort to military domination.